Why don't you come and join the Mt. Fuji Hill Climb Race to be held on June 12 (sun)?

Brompton and I will be a part of the race. 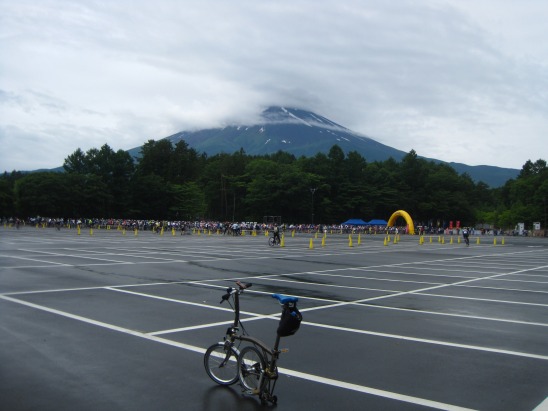 Riders go through the 25km distance and 1,255m elevation of the Fuji Subaru Skyline way heading for the 5th station of Mt. Fuji at an elevation of 2,305 meters. 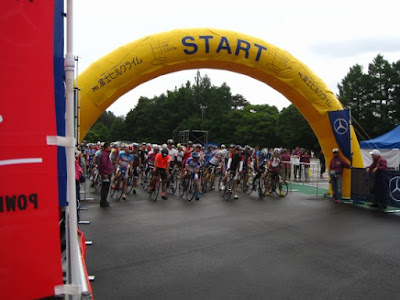 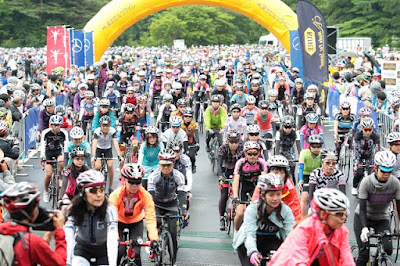 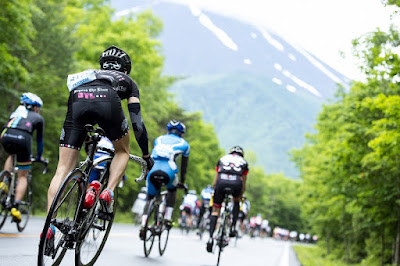 A wonderful view from the hight of beyond 2,000 meters. 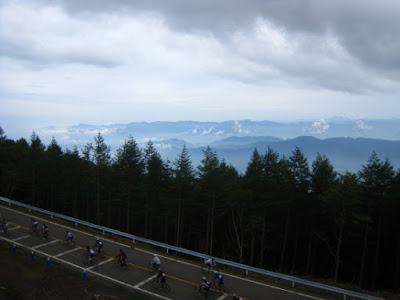 Yesterday I went to ICHINOKURASAWA for a snow ride with Brompton equipped with Scwalbe Winter, a pair of 16-inch stud tires. 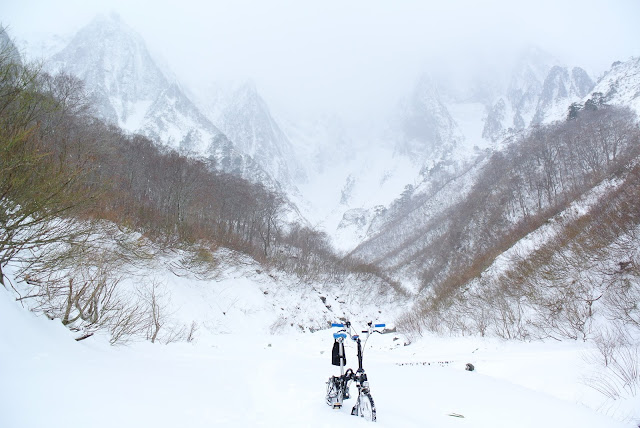 Situated east of Mt. Tanigawa-dake (1,977 meters), Ichinokurasawa is a rocky tract that sits at a bit less than 2,000 meters above sea level but is a place with steep cliffs, a complex topography, and fierce variations in the changing weather. The cliffs of Ichinokurasawa are among the three most notable rocky formations in Japan and attract Alpine climbers and gorge-climbing enthusiasts from across the country and overseas.

Though the road led to Ichinokurasawa is closed to vehicle due to snow layer exceeding 4 meters and risks of frequent avalanche during winter, climbers can enter the road from the gate at their own risk. Those who want to watch snow-covered Ichinokurasawa Gorge or dare to climb the cliffs to the peak during winter season start from the closed gate to go for about 3.4 km walk to reach there.

I wanted to see beautiful Ichinokurasawa in winter. One of the sites for mountain lovers said that in this season the snow volume around Mt. Tanigawa-dake was still much less than usual year and did not require heavy duty equipment. Hopefully the snow covers just a part of the road for a while.

From Tokyo, you may get on Joetsu Shinkansen to get off at Jomo Kogen Station (1.5 hour) and take a bus bound for Tenjindaira Ropeway Station (about 45 min.). Unfold your Brompton and let's start. 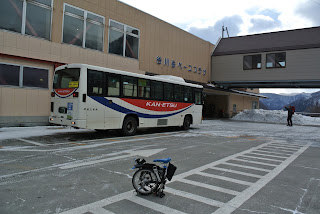 The 3.4 km way to Ichinokurasawa started like this. Deep snow was beyond my expectation. Brompton and I suffered a lot. Only a good thing was that weather was nice. 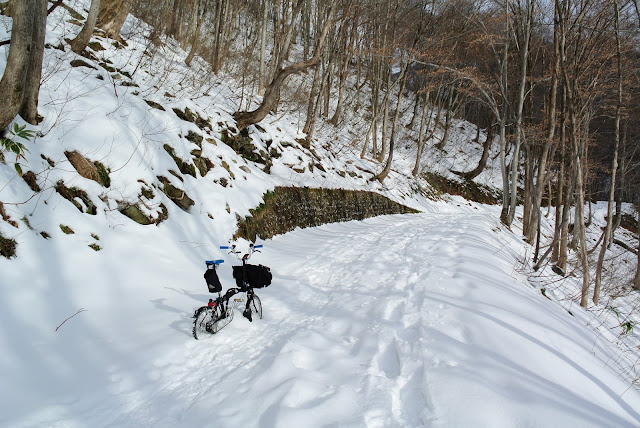 We reached at a half way point. Took a rest for a while. 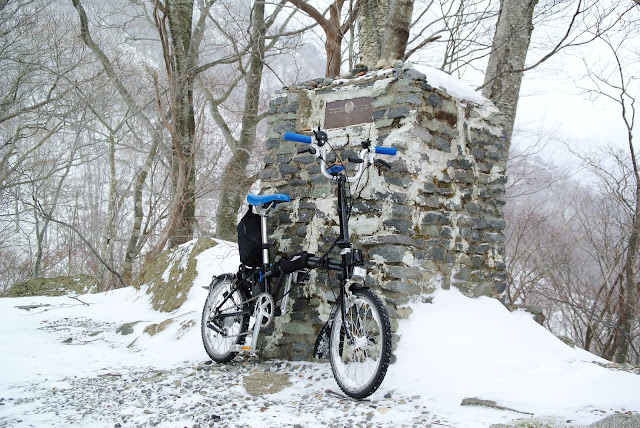 Then restart. We reached at Machigasawa Gorge. 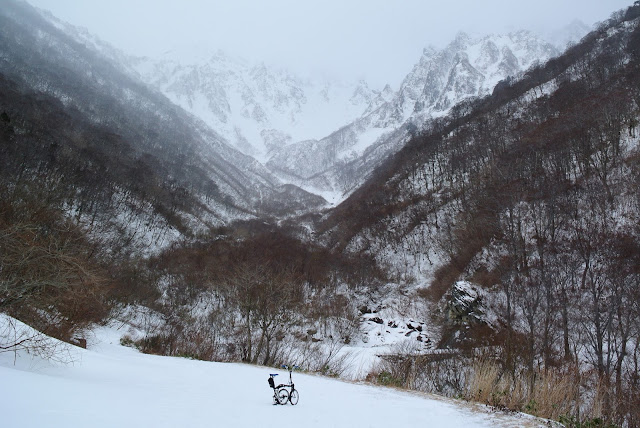 I met a gentleman who was on his return to the gate. He told that snow was not that heavy compared with usual year. Based on his frequent visits to the area, most of the trees were usually under snow surface during late January and February. 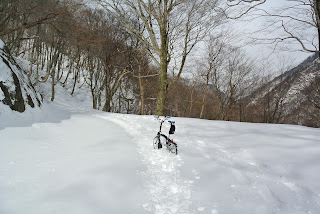 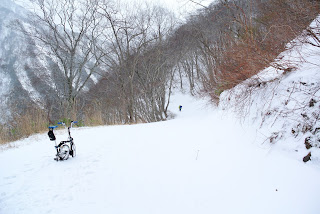 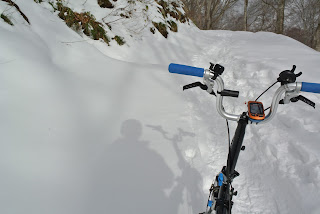 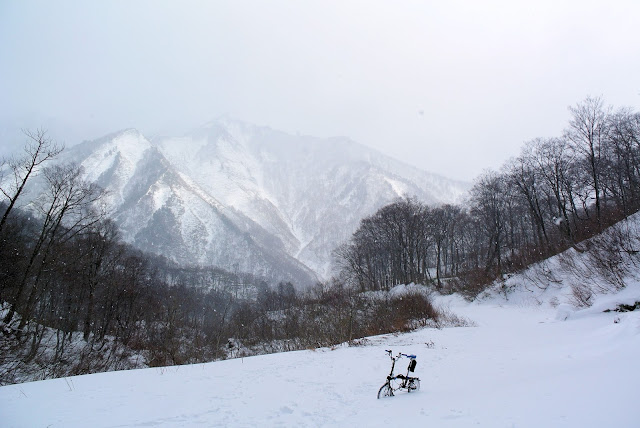 Look! Though partly covered with cloud, I understood why this beautiful and noble figures had attracted a lot of climbers and mountain lovers. 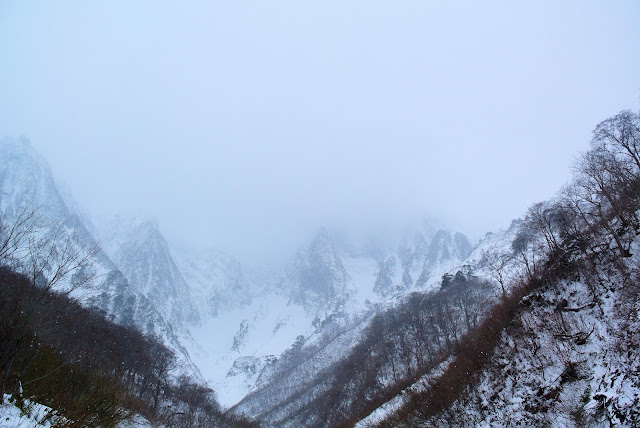 They were the most famous cliffs in Japan on which a lot of climbers challenged and lost their lives.

Based on statistics starting from 1931, accumulated number of victims in Mt. Tanigawadake is 805 as of the end of 2012 and most of them met fatal accidents in Ichinokurasawa during rock climbing. The number of the victims is recorded as the worst in the world in the Guiness Book. 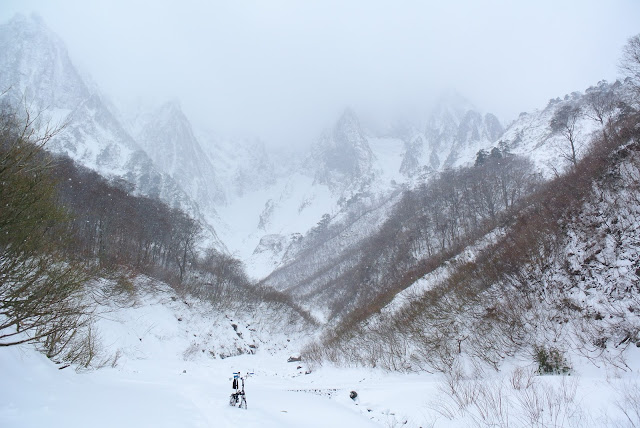 I mourned and prayed for the victims. I was on the way back to the lower bound.
Posted by wharton96 at 10:32 AM No comments: